SHOW ME WHAT YOU CAN DO

I sometimes I think in September and October the blog gets bogged down with TOO MUCH of my fundraising. On one hand I must spread the word, and on the other hand, I am sure you get pissed off at the incessant prodding about my causes and will more than likely leave me. I know. Serious abandonment issues. Plus, I’m a little neurotic when it comes to you, my readers. You’ve been here for me through pretty much everything (pssst…. don’t leave me).

And I promise guys, I do try  to keep things here on the blog light and separate from my fundraising efforts whenever possible, but my life is consumed  these two months. So what else am I going to talk about? They happen to also be my two busiest months next to the holidays because – as you probably figured out – they are back-to-back cancer awareness months (Ovarian and Breast cancer, respectively).

So indulge me a little, and I promise to sprinkle the FUN in here and there too. Deal? The fundraising will be over after October!

Now here is what’s going on, as well as a WHAT WENT DOWN DURING LAST MONTH’S FUNDRAISER: 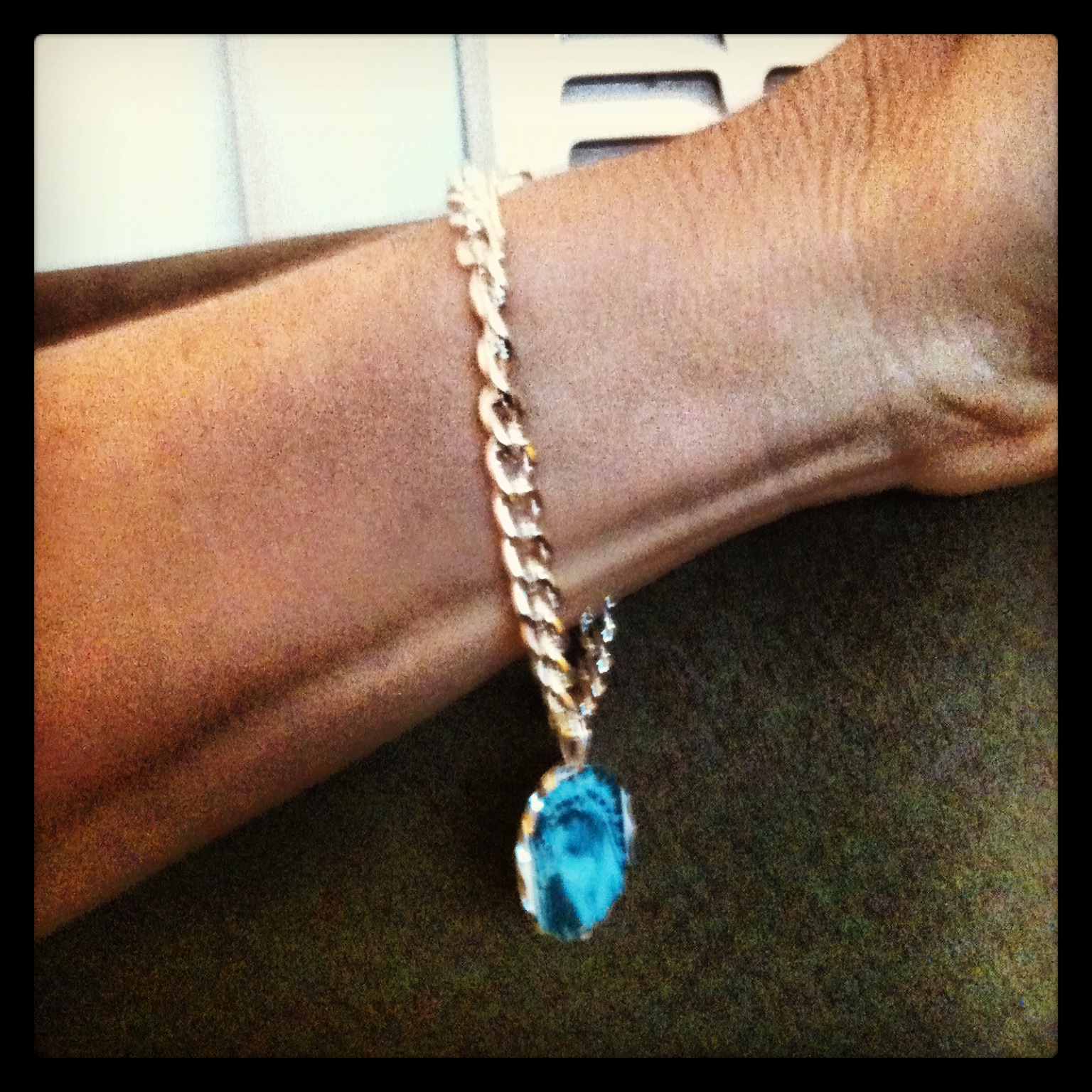 as well as a few other products (pins and magnets) that said “Do something to stop ovarian cancer.” I took my own icon for Ms. Cheevious 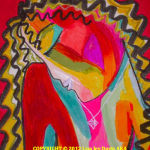 and adapted it into a teal image. All of the proceeds for that campaign went to the Ovarian Cancer Research Fund.  We raised one dollar per item (that was my profit, believe it or not. I know. I need to find a better supplier because the money these companies are making off my hard work is downright ridiculous), and raised a total of $53.00.

Don’t spread the hate. I know it’s nothing huge to write home about, but I’m doing SOMETHING, which is more than I can say for the masses. I am quite happy with the results, considering I merely emailed it to you all and shared it on facebook and twitter. But guess what? You can still buy any of these SUPER AFFORDABLE items (you guys, we’re talking about buying yourself one less Cafe Latte in most cases), and we’ll save up the profits for next September as well. Here is the artwork that appears on the charm as well as the other items. 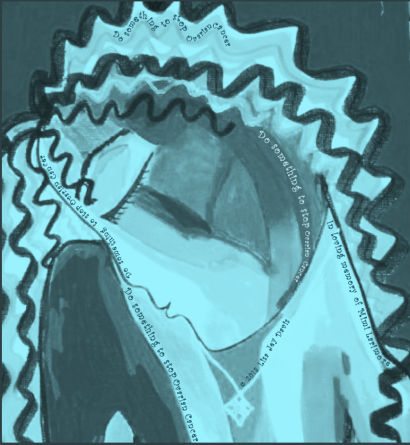 And all of the proceeds for these benefit FORCE (Facing Our Risk of Cancer Empowered), the organization that supports those afflicted by hereditary breast & ovarian cancer. The links for each are below.

It’s $10.95 plus shipping & handling. I have this same tag, but it’s got my icon from above (in the regular “red”) as the artwork, and I absolutely LOVE IT. It’s SUPER sturdy, well-made and stands out at the luggage carousel!

Get one for everyone in your life who travels and make a statement about Breast Cancer (the more you buy, the more worthwhile the shipping cost!).

And guys, if the NFL can sport pink, by GOD so can you. 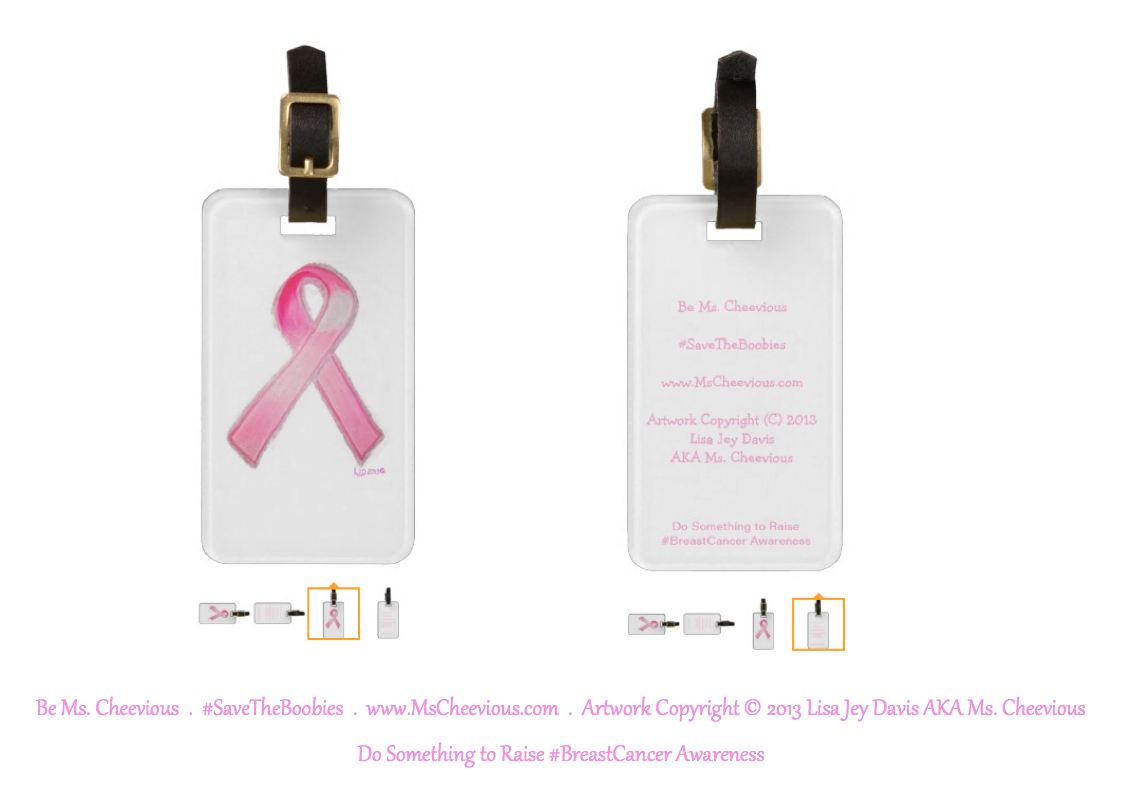 I’ve ordered mine in the dark gray (far right), but it’s available in nine different colors. It’s slightly sheer, but super long and pretty, and the writing and pink ribbon on it is small enough to be elegant, but large enough to make a statement. I’ve also made this item customizable, so you can add “In memory of______” to the scarf if you would like. It’s a fantastic item for fall and says it all – SAVE.THE.BOOBIES people. 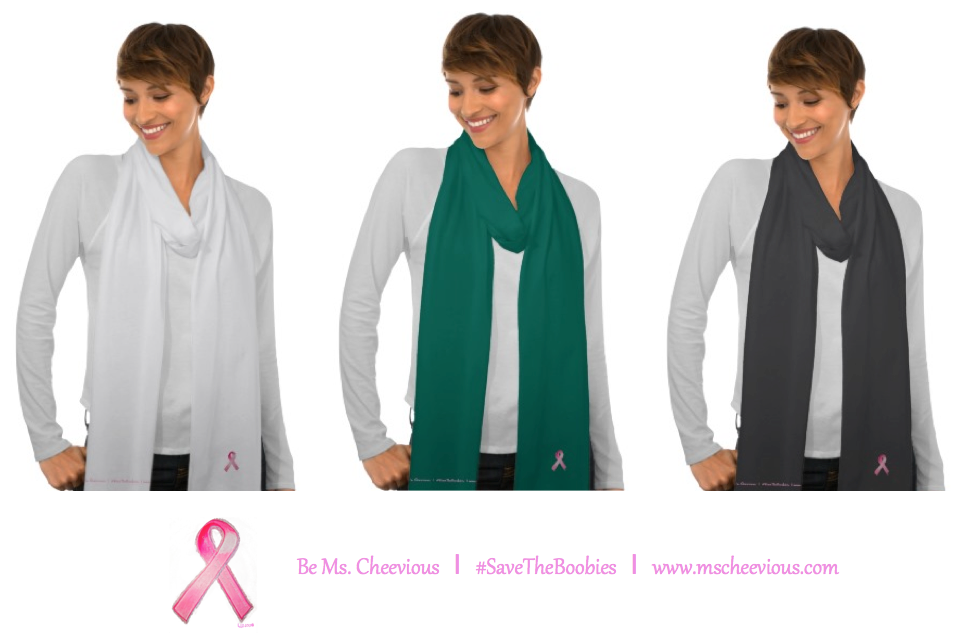 That’s it people. I’m spent. I’ve pushed, I’ve prodded. It is now your turn to do some good. Show me what you can do.