GETTING THIS HOLIDAY CHEER THING DOWN

When the holiday earmarking the thankfulness thing is so recent we can still smell the stuffing, and the next one earmarking goodwill toward men is so close you can taste the candy canes, you know it’s THAT time of year. The time when we’re supposed to allow anger, rage and hatred for all of mankind to dissipate in favor of those more gracious expressions, right?

Yes. It is that time. 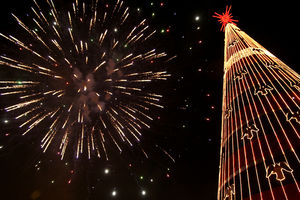 But just because I plan to be joyful, cheerful and full of good will doesn’t mean I always am. And even if I do exhibit these great qualities or sentiments once every um – day – right? –  these acts shouldn’t be confused with any kind of zen-like or mature disposition – PFFF.

I mean, I’m working on it, but god it’s taking a while to get there.

Remember the time I told you how I was sitting stalled on a freeway off-ramp just before this past Thanksgiving, because car number 2 in our little family blew a gasket (or something)? That story may have flown under your radar, because I posted it on my personal website rather than here. I wax PG on that site.

Yep… I had the hood up and steam was rolling from the engine, when some lousy punk-ass kids drove by leaning on the horn, hurling expletives at me for blocking the road. I could have been the bigger person and chuckled at those involved little people who were obviously incapable of understanding the great opportunity for compassion they were missing. But I hurled back an expletive like “F*CK YOU! F*CKING ASSHOLE!” as I chased them thinking I could actually take the whole lazy, good-for-nothing lot of them. I probably could have.

So, now when I find myself in Tucson, with M.C. Nugget (in case you forgot, he’s on location shooting a film and I am his guest), it’s only fitting that the freaking hotel can’t get a single friggin’ thing right…

I have to hold my breath til I turn blue, then slap my own face to stop myself from doing what I REALLY want to do.  I have do my ohmmmms of I’m a guest of the film production people…. I’m thankful… I’m gracious… I’m joyful…

But what I really WANT to do is sign up for EIGHT THOUSAND different Yelp accounts and report every misstep by this flippin’ hotel. Because SOMEONE should! They lose mail, they forget to do promised wake-up calls, their gym has dirty mats and equipment, no one knows how the jacuzzis by the pool work, and the maids keep forgetting to do things like put pillow cases on our pillows. (The irony of my complaining about my maids – and how ridiculously privileged that sounds doesn’t escape me).

But you guys…. I won’t do that… I won’t sign up for eight thousand yelp accounts (even though I probably should), because DAMMIT…come hell or high water, I’m getting this holiday cheer thing DOWN.

Let’s do it together. Shall we?

13 Responses to "Getting this holiday cheer thing down"