According to Jewels is a blogger who tackles topics ranging from relationships, sex, and dating. She is brutally honest while at the same time full of whimsy.. making her the perfect addition to the Ms. Cheevious community. Read More >

Cady McClain is a two-time Emmy winner for her work on “All My Children” and “As the World Turns.” She’s also an artist, author, musician, and overall funny lady.  We think these traits make her quite the fine example of all things Ms. Cheevious, but she had us at EMMY. Read More >> 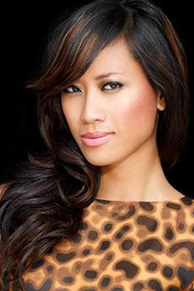 Karen M, Soto is the co-founder of Modern Nerd Apparel and The Sassy Six. She is also involved within her community as a co-host of the Venice Tech Entrepreneurs and Beach Reach (Heal the Bay). As an independent contractor for small businesses, start-ups and non profits, Karen wears many hats. Her jobs entail anything from copywriting, blogging, graphic design, illustration, wordpress, social media, SEO, project management, PR, marketing, strategy and promotions to everything in between. Read More >>

(Karen’s Ms. Cheevious Article: “We Can’t All Be Nelson Mandela“)

Marrie is a Geekalicious NorCal Betty masquerading opinions about dating, sex & relationships as fact through dirty talk & wicked rants. You can read more on her personal blog Read More >>

(Marrie’s Ms. Cheevious Article: Why I’m Glad I’m a Woman… And You Should Be Too)

Dorota Skrzypek was born in Poland, grew-up in Canada, and moved to Southern California in 1997. After many years of flying airplanes, designing airports, and dating a swarm of eligible bachelors, she decided to focus on writing fiction. Sex, Life, & Hannah is Dorota’s juicy woman-on-top book series… Read More>>