Ms. Cheevious Note: Continuing in our series of guest articles I’m thrilled to welcome Cady McClain, two time Emmy winner, author, artist, musician, funny lady and all around Ms. Cheevious gal as this week’s guest contributor (you will soon learn just how mischievous she can be).

Let’s give Ms. McClain a warm welcome here in Ms. Cheevious-land: Read, enjoy, comment and share this article with everyone you know.

My Most Mischievous Moment

My most mischievous moment was … when I ended up naked in a rooftop pool.

It happened quite randomly. I was attending a baby shower. Who would have thought in less than 5 hours I’d be drunk off my ass, naked in a pool on the roof of the SOHO house in NYC?

It’s true, the baby shower simply wasn’t “doing it” for me. I guess I’m not terribly sentimental about other people’s children. In fact, it’s really hard to care less. Their parents seem to care quite enough, thank you. So I will admit it. I WAS BORED. Bored out of my mind. The guy who sat next to me at the table, the one guy who seemed a tiny bit interesting took off early. Maybe he didn’t want to get hit up by a bunch of wild women, who knows. I couldn’t blame him. More than one of us was looking for trouble that night.

The Englishwoman Madame X, saw my German friend Olga and me and suddenly stopped texting whatever was so important, focusing in on me like a laser beam. She stomped over with a curious half smile on her face. Something was brewing in her eyes, but I was too naïve then to truly understand the expression.

“I am inviting my friend over. He is in town from Ireland. HE is WITH ME, OKAY?” She announced this with no provocation or to no argument from either Olga or myself. Then she continued, much to our surprise, “SO DON’T GET ANY IDEAS, ALRIGHT?”

“Alright! Christ!” I said, “I don’t know what you are talking about but, what-ever!” I was intrigued now, that was for sure. I think perhaps that was her aim all along – to stir up trouble. “What are we doing?”

“I DON’T KNOW,” was her already-well-into-her-third-martini reply. “BUT HE’S COMING.”

I turned to Olga. “Well, OKAY. If we have a ‘special guest,’” I rolled my eyes for emphasis and to make Olga laugh, “Maybe we should do something interesting.” I don’t really remember whose idea it was to go to the pool but once it was suggested we all agreed it was a good move. It was the idea that defined ‘who was into a round of fun’ and who was not.

At the mention of “The Pool,” the few baby lovers left lingering decided to toddle off to whatever baby thing gave them a thrill while the rest of us (single women) headed to the roof – where champagne was being served and the heated pool beckoned. 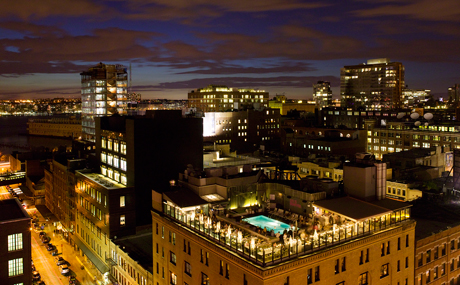 It turned out to be really lovely weather for October, and for some reason there was no one else there but us. I wonder why they let us stay. We were not exactly behaving ourselves, but we were ordering drinks – lots of them. It was fun to watch the other girls (there were about six of us by this point) saunter around the pool and show off for the waiters. We had scared off any normal men. It was at this point the poet arrived.

He had long, shaggy blonde hair and was tall with a muscular build. A handsome chap, the kind that looked like there would be no taming him – in fact, quite the contrary. He was a “use it/you and lose it/you” kind of fellow. I could see why Madame X thought it was important to tell any Irish looking dame like myself to back off. We were, shall we say, each other’s “type,” and by that I mean we both knew what alcoholism and depression looked like first hand. You recognize it when you grow up with it, and you don’t ever live without being aware of those who have it and those that don’t. It’s a little family gift, a turd of love. I have learned that the attraction to other people who are similarly gifted the turd, is not love, nothing of the sort. It is simply “recognition of a similar self” – nothing more nothing less. However when you are young and stupid, it feels like sexual attraction. It’s one of God’s cute little tricks to beat you into admitting you know nothing.

Madame X announced she was going into the pool and promptly ‘dropped trou.’ She had a pretty body, small breasts that lie upon her chest like little cupcakes begging to be licked, and a fine round rump. I liked looking at her.

“Fuck it,” I said (as I have so often), and also shed my wears. Now – if you don’t know me, you need to know I am one part ‘uber conservative priss’ and one part ‘wild hippie child.’ I cannot control which one or when either one is going to come out – it just happens. Tonight it was the hippie. Let’s just say I was into some free hugs. Almost all the girls jumped in right after me, but Olga was not unleashing her largess. She preferred cocaine and cigarettes to naughty behavior, unless of course, she was fucking someone famous or infamous. This she enjoyed until she could get back to her cigarettes whom I suspect will turn out to be the love of her life.

We swam for a long time. It was someone’s (mine) bright idea to get shots of tequila. I think I was missing my so-called boyfriend at the time who lived in another state of body and mind – one that didn’t include coming into town to hang out with me and my friends. He liked tequila a great deal, almost as much as he liked pot. Tequila shots and champagne, however, don’t like anybody.

I don’t think I blacked out, but I don’t remember when the poet swam up to me and we began some sort of dialogue. We didn’t touch, but it’s an undeniable fact that we were both naked. We simply swam up and down the pool, talking. It was really lovely. A poetic moment, of sorts: the warm water running over my body, his blonde pubic hair wafting in the chlorine, his body standing over me as I floated and we talked about something philosophical and restful and intriguing. I didn’t want to fuck him – really, I SWEAR. It would have seemed like too much work. I was tired of all the emotional exhaustion that comes from fucking, anyway. I just liked talking and we happened to be naked. Some people would understand that. Others, like Madame X, did not.

“WHAT THE FUCK DO YOU THINK YOU’RE DOING, MISSY?” Came the bellow from down the pool. I stood up looked at the poet and realized, oh yeah… this was the guy I was supposed to stay away from. It was an, “Ah shit,” moment, because I knew no one would believe me when I said I was enjoying the conversation.

“I think I’d better, uh, you know,” I said. He nodded and looked pissed. A pleasant moment ruined.

I watched him push his body down the pool towards her. She kneeled and tried to touch him, which he brushed off. Then I had to stop watching. I found a towel and dried off, talking to Olga who looked like she saw a very familiar play begin to act itself out again. It was hard to see her friendship so tested, as she had been a good pal to Madame X for many years.

When I got my outfit back together I noticed the poet had left. “Where’d the guy go?” I asked Olga, who shrugged. He wasn’t the only one. Apparently while I was off pulling my pants out of my wet ass, he and a few other girls had taken off. Madame X had been tearing into each one of them as they walked out. The tequila had made me too drunk to notice. She turned her fury to me.

“HE’S LEFT! YOU SEE WHAT YOU DID?” She stomped over like an angry toddler and sat across me on a lounger, crushed. “YOU SEE? I TOLD YOU TO STAY AWAY FROM HIM AND NOW HE’S LEFT.”

“You know, we were just talking. There wasn’t anything going on. He’s nice. I don’t know, maybe you should call him.” What a stupid girl I was. In way over my head with a diva, I went for the soft sell. I should have left then, but I didn’t. I thought I had to make up for something, had to be a friend and explain my point of view. MISTAKE!

“YOU KNOW, I HAVE CANCER!” She screamed at me. “I HAVE FUCKING CANCER!”

Now you need to know this too: my completely insane, uber-dysfunctional mother died of a long, disgustingly hideous and vomit inducing trial with cancer which lasted from my teens into my mid-twenties, so when she pulled that card, I was frozen by her statement – frozen and thrown back into those years when my mother had screamed the same thing at me in order to control my actions and drive me into being her 24-hour nurse/husband. It was then I KNEW I had to get the fuck out of there. BUH-BYE.

After I begged Madame X’s forgiveness, Olga, having had enough of the opera, agreed to come with me and we got into a cab headed downtown. I managed to hold it together for about five minutes, after which I promptly puked all over the New York Post Olga had so thoughtfully bought with her newest pack of Marlbouroughs. I could see some guys in the next car over laughing their heads off as my body convulsed into a second heave. Not a fun moment.

While Olga took my giant German Sheppard for a walk I puked again in my very own porcelain toilet. According to Olga, my dog took the biggest shit she had ever seen a dog take. So big she had to dig in the trash several times for paper and plastic bags to pick it all up with, as I (selfishly) had managed to use up all of her newspaper with my vomit. Olga deserved a medal. Years later, we would talk about this night as if it were something hilarious that happened as opposed to horrible and tragic and I would laugh along with her while knowing inside it was, except for the moment in the pool, as disconnected as I had ever been. I don’t know, some people find pain funny.

ABOUT CADY MCCLAIN
Cady McClain is a two-time Emmy winner for her work on “All My Children” and “As the World Turns.” In 2006 her blog, “Confessions of a Mad Soap Star” received over 2 million unique visitors. She is currently writing for ANDMagazine and Policymic.com as well as on her own website www.cadymcclain.com. She is also currently writing a memoir titled, “Murdering My Youth,” represented by Michelle Humphries at The Martha Kaplan Agency in NYC.

Check out her “Suzy F*cking Homemaker” and “Reading Twitter with Cady” videos and more at www.youtube.com/blueglitterfish.

13 Responses to "My Most Mischievous Moment"