Okay – so I went to my favorite nail salon in Santa Monica last Saturday. It’s called Main Attraction and it’s located along Main Street nestled among all the other cute shops, bistros and boutiques.

I walked in for a much needed mani/pedi, and immediately heard a familiar voice. It took me a while to figure it out, but just a few feet away from me sat Patti Stanger of the Bravo TV show, Millionaire Matchmaker.  The premise of the show is that Patti owns and operates a high profile dating service, where she introduces successful bachelors to their supposed “dream girl.” 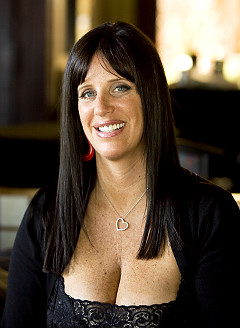 This is a GOOD picture of Patti.

Anyone who’s watched the show knows what I’m talking about when I say that Patti has a distinct voice, with a very – um – distinct – to put it nicely – personality.  This is no surprise.  In fact, I am sure part of the reason that she has her own show is because of her demanding, whining, and in-your-face antics, and subsequently, the drama she creates in her own life and business. And she really does do this in real life, people!  I am witness to the fact that her diva – bitchy antics are NOT a performance for the cameras.

It’s all about the drama, believe me.  Watch reality tv much?  Those tv producers eat it up, because the public eats it up.  Kinda sad.

And with that, my lovely boys and girls, I’m here to say that I, Ms. Cheevious, am not one to disappoint! I’ve got some drama to report on Ms. Stanger that I just know you’ll eat up! And I can’t wait for the new readers to poor in as a result!  Hey – I have “ratings” too, even if they are Internet ratings.

If you are new here – hellOOOOOO there dahling! We’ve been waiting for you!  Well, sort of.  Okay, not at all, but geez it sure seems like it!  We’re glad to have you, nonetheless!

Something you will notice in my posts is that most everyone here has an “alias” – that is, an alter ego or an “a.k.a” persona so that their true identities remain classified and protected.  This way, I can serve up the really juicy stuff without embarrassing my peeps.

BUT (and you knew there would be a but) as I said in an earlier post “Goose Hunting on the Farm,”

‘if you are famous and carrying on in public, and if I see you, or happen to have some interaction, then guess what?  You don’t get an alias or protected identity here.  Your real name will be used, because hey – otherwise, why would people read this blasted thing?’

So there you have it!

And my friends, Ms. Stanger is about to be sold out. Exposed. Undressed (not! ewwww) and well – okay – truth be told, she’s pretty much just getting validation for her already WHINY, ANNOYING television  (which is also her real life) personality.

The folks at the Main Attraction nail spa are lovely people.  They provide a manicure and spa (massage chair) pedicure for $18.00.  That’s just EIGHTEEN BUCKS to scrub and slough off the dead skin from your (and I mean “your” in the nicest general sense, I swear) stinky, flaky and god-knows-what-kind-of-disease-ridden feet.  Not to mention clipping, filing, polishing and making those pudgy little toes look sort of normal and cute.  Then they put a second person there to take care of your nails at the same time, so you don’t have to wait.  Think this is normal?  Should we expect this?  Try getting the same service at the same price in Aspen, Colorado, or Grand Junction, Glenwood Springs, Denver, Albuquerque, or countless other places in this country, for that matter!  These people work all day long, for about ten to twelve hours a day.  They are Asian, which means it is part of their culture to be polite and proper.  True, they may be cursing you in Vietnamese or their mother tongue (especially if you are rude and arrogant), but they smile all the while, and hey – ignorance is bliss – un-kay?

So, anyway, I was JUST about to do the unthinkable and walk over to the DIVA, because I figured we sort of have some similarities in the way we present ourselves.  I know, she is whiny and demanding (not at all like me) – willing to do anything to be successful in business (again, not at all like me).  But I admit, I am a shameless attention-monger who loves to tell stories and isn’t afraid of divulging some of the more private parts of my life, as long as it involves getting a good laugh.

So, my first thought was, ‘We are both a little edgy, and probably a little misunderstood.  I’ll just mosey on over and tell her I’ve seen her show, and liked it.”

Then she did it.  Not once – but twice.  She went all DIVA up in my face, and in the faces of all the hard-working people at the salon, not to mention the clientele.

In the first incident, she frantically yelled out across the salon (while we innocent bystanders were trying to enjoy a peaceful, leisurely experience) in her hysterical, high pitched voice – for all to hear, “Excuse me!  Excuse me!  EXCUSE ME!!!  What’s his name? What’s his NAME?” motioning to the guy who runs the salon.

The guy came over to assist her and she insisted loudly, “Didn’t I ask for extensions?” as she held her fingers up – spread eagle in the air for him to see.  Then she wagged one of her fingers. I knew right away that she wanted them to lengthen just one of her nails. I’d had it done once before.

“Oh, that’s right,” the manager said, and he proceeded to direct the technician accordingly.

Millionaire DIVA rolled her eyes in the size and circumference of a basketball and said in her nasally voice, “WHYYYY do we ALWAYS go THROUGH this? Isn’t there SOME way I don’t have to go through this Every – Single – TIME?”

The manager started to answer, and as if to trump anything he had to say, she interrupted, squealing threateningly, “I TRIED to tell him what I wanted, and HE. ARGUED. WITH. ME!”

I’m not sure what came of that first situation.  I’m sorry.  I think I blacked out, but in all fairness, I was pretty busy saying my ohm’s and practicing my deep breathing exercises, trying to forget she was there.  As it was, she already stood a good chance of either completely ruining my day, or at least making the salon workers so flustered, it would certainly ruin THEIR day!  Not to mention the fact that there wouldn’t be a good manicure or pedicure to be had in the place. Everyone would be so nervous, there’d be red nail polish running amuk on my toes.  Things were looking pretty grim.

But it seemed to settle for a bit after that.  I sent out a few Tweets about the girl’s DIVA antics, texted a few of my peeps, who proceeded to call and dish with me about it, and settled into my massage chair. I actually thought maybe she’d left, when the second incident occurred.  My eyes were closed and rolled back into my head during an ultra relaxing shiatsu chair massage, when the bliss was shattered.

She screeched, “EXCUSE ME!” and about six spa staff members came running to her. “Excuse me!”

“She just HIT me.” she said motioning to – believe it or not – another CUSTOMER!!!

“I was walking! And she RAN into my FINGER!” she shouted at the manager.

It was obvious to me what had happened.  She’d apparently gotten up clumsily from her chair (she is no small figure), collided with the lady, and – you guessed it – ran right into the woman’s bag with her newly “extended” finger nail.  Then she proceeded to scream at the staff for all to hear, as if somehow they hadn’t protected her from her own clumsiness.

I felt so bad for the folks at Main Attraction.  Here was this woman with a bit of notariety, and I’m sure they wanted to make a good impression, but there was no pleasing her.  She was a cancer!  A bad seed!  Rosemary’s baby! Ha!

After I was done, I was taken to sit in an area where everyone dries their nails – and there she was.  She had two people with her, I think, and everything was all about her.  Have you ever been around a TRUE BITCHY DIVA?  It is ALWAYS about them.  They have no awareness that anyone else could possibly have needs.  And even if they do, everyone else’s needs certainly don’t outweigh the DIVA’s.

As I sat their getting her negativity and bad energy crammed into my personal space, and as she jumped from one topic to about twenty within one sentence, I decided she just had to be on something – like CRACK.  After all, how could anyone embarrass themself so much and be so utterly unaware?

Well – I guess they can.

I gotta’ tell ya.  In the end, it didn’t really ruin my day.  I decided that I was extremely fortunate to be in that place at that time.  That stuff hardly ever just happens!  These situations never just come into my life!  I’m telling you!  You can’t make that sh*t up! But it did happen, and it happened while I was there!  And thank GOD. How else would I be able to serve up this great little dish?  This potentially horrible day at the salon turned into a very good fortune for me.  So, as usual people, I was given lemons, and made lemonade! HA!

I did go up to the manager of the salon and tell him I was going to write about this, and that there was no excuse for her actions.  He thanked me and said, “you know, people with that kind of bad energy just won’t go very far or live very long.”

And that’s it for now my beauties!  Tune in next week.  I’m sure something juicy will land square in the center of my lap again, and you KNOW I will share it with you.

Have a fabulously sunny weekend everyone!