Yes – we went and did it, people.  M.C. Nugget* and I went to Mammoth for a ski getaway last weekend. It turned into an entire debacle involving my iPhone.  The tale is full of twists and turns, as well as screams and tears, but you’ll have to watch the video below to know why.  Now here is the cool part: ONE lucky commenter on my YouTube channel will receive a very cool prize (I’ve got something for your comments here too. Keep reading).  I hold the actual prize up in the video toward the end, but here is a close-up: 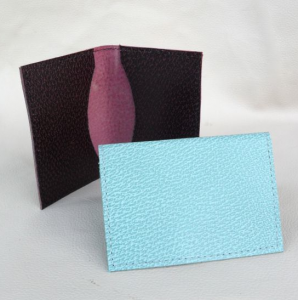 I chose the powder blue version. It’s a Miller and Jeeves (out of Oxerfordshire England) business or credit card wallet, and the leather on this little guy is so YUMMY smelling!  You’ve got to check it out at www.bottica.com.  They were the gracious people to gift this to me because of my KLOUT score online! Isn’t that awesome?  Yes, I am well aware than many of you don’t know anything about KLOUT scores, and I’m talking gibberish as far as you’re concerned. But think in terms of the word “clout” – what it means – and then, as it relates to “online” or “internet” presence.  My score is actually not very accurate, because it won’t allow me to combine more than one twitter account or more than one Google+ account, and guess what? I have about 8 twitter accounts.  Yes.  8 or so.  Plus or minus…. maybe. Really people. By now you know that I have my OWN online presence, as does Lisa Jey Davis (the other me). So there are numerous profiles running around cyberspace. I don’t blame Klout for not being able to keep up. I’m suffocating in the bytes myself!

Anyway – watch the video. Comment on YouTube if you’d like to get a chance to win, and comment here – because I’m going to pull together a consolation prize for one person who can tell me the very last word I say in the video – and when it appears! This one is fun.

For those of you via email, who cannot see the video box, here is the link: http://youtu.be/b74Vvkf7JrY

Good luck everyone!  Tune in next time for an article on those things Girls Secretly Wish About Guys! OHHHHH YEAAAAH.

*If you don’t know this already, all of my friends and family are given aliases in Ms. Cheevious-land, unless they don’t care either way. In that case, I happily broadcast their lives here, there and everywhere for all to enjoy.  M.C. Nugget, aka Emcee Nugget, aka Nuggie, is my beau.