Please don’t laugh when I tell you why I *thought* I was a glamor-puss, but based on what transpired, I am faced with the harsh cold reality of “otherwise.” This is serious business.

Yesterday was a big day in my life: the day of the highly anticipated, exciting and extremely glamorous photo shoot for the cover of my book “Ms. Cheevious in Hollywood.”

Picture this: My hair long and flowing … the light on my face, a bustling film or television set in action all around me… I’m dressed to the nines and looking fine, I’m in charge, and I’m Ms. Cheevious.

That was the idea.

I strategically planned this photo shoot as if it was the next space shuttle launch. There were schematics, photos, and detailed instructions for crew and cast members (oh yes, there was a cast).  I had dreams.

It’s interesting how when planning ultra-glam scenarios, I forget to account for “me” in them. True, I know how to produce. True, I know what looks good. But I’m generally directing and producing these things for other people, and enjoy the view from the sidelines. Seldom do I allow myself the luxury of participation, and there is good reason for that.

I am a klutz. I’ll just confess it now, and dispense with any future misunderstandings.

I was running around in my Ms. Cheevious stilettos, trying to make wardrobe changes in the blink of an eye, and I remember at one point thinking to myself, If I’m not careful, I’ll be pulling a Sandra Bullock here. I remembered her sexy strut in the film Miss Congeniality that ended in her tumbling to the ground, and bouncing back up. I wondered if I did fall, would I be able to bounce up like she did?

This is what goes on in here.

And NOW… I am here to tell you with great conviction that your thoughts do create your reality. I am living proof of it.

We were in the middle of a shot capitalizing on some natural light when my photographer said “If you want another dress, you’ll need to make it fast, because we’re losing this light.” So I ran, of course. More like I “Morticia’d” as fast as I could.

I rounded a corner when one of my amazing-KILLER-high heels fell into a little dimple in the cement and KABLAMO! I went sailing through the air.

No schematic in the world could have orchestrated the poetry in motion that occurred in one-second flat while I lived it in slow motion. My brain was well aware of every little nuance of this symphony of catastrophe, and attempted to negotiate at every single micro-interval:

No I am NOT falling like Sandra Bullock am I!?

Nope… the hip is GONE people!

Moving on then…  Not the head… NOT the head!  Anything but the head!

Shit… the head is toast.

Here is a photo from the shoot later (after the incident) that day in said stilettos, because, well, I need you to really grasp this situation. Thank god for the fabulousness that was Nicole – the makeup artist. You cannot see the Goose Egg that had formed on my head. 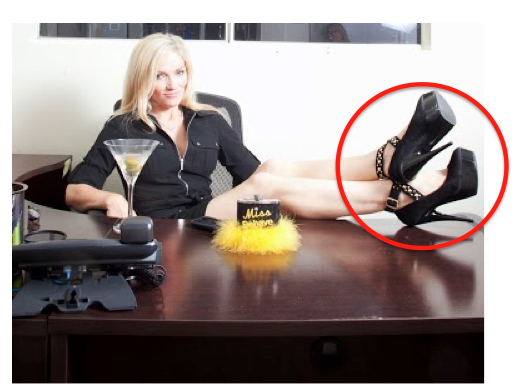 And here is the slightly healed-up bump on my head sans makeup (after 24 hours). It’s good I’ve got a thick Italian scull. I probably damaged the wall. 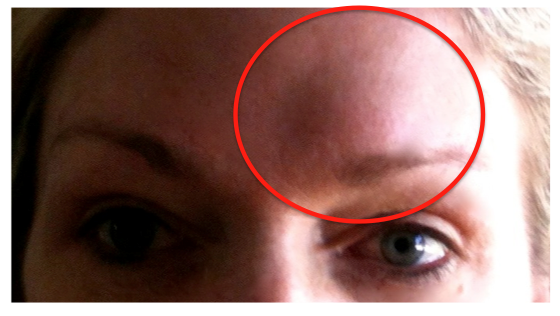 I won’t bore you with further details of the glamor-puss I really was, but here’s a hint: I gave the crew and M.C. Nugget another scare not long after the “Stiletto Crash Ballet,” when after munching down on a carrot, someone made me laugh. Then choke. Then not breathe.  M.C. had to perform the Heimlich maneuver on me, until I produced something that looked this:

People like me should remember that warnings such as “Do not try this at home” are intended for them.

I will say this in my favor. After the choking incident, I hardly needed any makeup retouch at all. How cool is that?

I felt as close to Sandra Bullock from Miss Congeniality as I ever have after yesterday’s shenanigans. But alas, I am no Sandra Bullock who klutzes and flops around making fun of herself and laughing all along, still managing to bounce back up without a scratch.

Ahhh… to live the life of a real glamor-puss. One day, perhaps.

Have a fabulous week my loves!  See you next time!

24 Responses to "I Thought I was a Glamor-Puss"