I’m willing to wager a bet that you love life. You’ll hang on to it like grim death. Most humans do. Damn straight. As a matter of fact, if you were to suddenly come face to face with the Grim Reaper, you might (if given the chance) unleash a can of whoop-ass on the dude.  It wouldn’t necessarily be a welcome meeting.

Granted, there are some who welcome the dark visitor… but at best, if they are ready for Mr. Reaper, they’re generally facing uniquely difficult daily physical challenges or struggles and are either exhausted from the uphill battle of vibrance and vitality and of maintaining quality of life,  or they are simply resigned to the Reaper’s inevitable visit after living longer than they ever imagined.

But mostly, we humans love life, and want to do what we can to keep on living – and living well.  Am I right?

What is the definition of “living well” if it is not to enjoy experiences we relish, people we cherish and a life that is not plagued with ailments, aches, pains and other physical struggles?  Ahhhh… to be able to get through life without any physical ailments or challenges.

But how can we maintain a grounded, joyful, refreshed and content physical existence, regardless of the other “stuff”? How can we feel cleansed and clear if we are dealing with daily aches, pains and physical setbacks?

One of the key solutions for me is by doing yoga or similar stretching exercises… basically unhurried, peaceful and deliberate stretches….

You could argue that I really get rejuvenated purely because I’m taking time out for me and showing my body love… and I may not argue with you – in which case, this post won’t mean a whole heck of a lot to you. But I seem to think what I am doing actually works.

The only way I’ve found sustained relief and a refreshed youthful feeling is by occasionally (or often) devoting just a little tender loving care to those muscles and bones through doing my own little yoga routine (also known as my yoga practice). It’s amazing how our bodies respond with even the littlest bit of TLC. 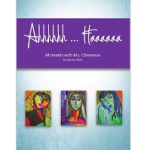 This is precisely why I wrote my book, “Ahhhhhh…Haaaaaa Moments with Ms. Cheevious.” I put it together primarily for people who’ve never tried Yoga but were curious or intrigued.  That isn’t to say the routine in the book won’t challenge you if you’re a bonafide yogi… It will if you allow it! But I did it for newbies mostly so they could try it in a non-threatening environment, without the pressure to keep up (and not fall over!), or without all of the Ohms and Ahhhhs (not that there’s anything wrong with that) or spiritual overtones that they could face in a random yoga class.

When I first tried yoga (even just a few classes), I immediately felt my body refresh and rejuvenate. I fell in love with it and became an instructor in Aspen, Colorado.  I still love it. There is nothing like it. And it’s a great way to stay lean without damaging knees, hips or other joints. As my yoga instructor once said, “You do not have to do “Power Yoga” to lose weight or get fit with yoga. Haven’t you noticed? There generally are no overweight people who practice yoga regularly.” So why not give it a try? It’s even easier with my little e-book…

And… I am giving the e-book away for FREE to new subscribers to the weekly posts here on MsCheevious.com

(if you’re already a subscriber and would like a copy, just let us know, or simply buy a copy for less than a buck).

I’m also giving away FREE copies for iPAD or iPHONE to the first 50 people to request it! Just let us know here (FIRST COME, FIRST SERVED)!

It’s currently being sold for only .99 cents all over the internet for Kindle (if you don’t own a Kindle, you can get kindle for PC or Mac for free), Nook, iPad/iPhone and every other kind of e-Reader.

PLEASE FORWARD this to your friends to get a FREE copy of my book by SUBSCRIBING HERE.

And watch this video… You’ll get a kick out of seeing me FALL OVER with no shame.