I slept really well last night. When my blackberry alarm went off at 7:45 am, which is later than I should have risen, I grabbed it, hit snooze and somehow, miraculously fell back into a deep sleep.

When I woke up – oh, a cool 15 minutes later, I was laying peacefully on my back. The first thing I noticed, however, was that my right hand had a pretty good hold of my left boob. And my arm wasn’t sore from clenching, no. It was sort of a peaceful, restful hold. I chuckled out loud.

First of all, I must address the chuckle. That my friends, is pretty good, because contrary to my normal inclinations, I’ve been waking up lately with worry and to-do lists on the brain, so the laughter was a welcome guest this morning. And people, I know this is an aside to that, but I want you to know that I ALREADY KNOW I shouldn’t be worrying, and have some serious meditation to do to get off my arse and start creating an incredible future. I knew some of you wouldn’t let that “worry” thing pass you by.

Talk about Girls Gone Wild!  And I wasn’t even TRYING!  Tell me people, what could it MEAN? Why is it that a girl wakes up peacefully holding her breast?  I could NOT for the life of me get a “hold” of my breast while awake, without clenching or “grabbing.”  Believe me! I tried to recreate it!

But apart from the dream I had last night, where I was dating a wild and crazy rock star (which – okay – I sort of AM), and the fact that a dream like that could elicit all manner of mayhem in my bed.  Apart from that, why my boob? And why so peaceful? And why coffin-style?

Tell me, oh great dream interpreters, please! And does the meaning change if it was reversed? Right boob, left hand?

Am I reading too much into this? heh heh

I gotta say, this Halloween weekend is getting off to a jolly old wild and crazy little start.

I’m going to be an officer of the law, and I’ll be on patrol on Main Street in Santa Monica with my funny, sexy, handsome man M.C. Nugget (@EmceeNug on Twitter). He’s dressing as Fred the Wonder Chicken (remember him?) – dressed as a pirate.  I wanted him to be my jailbird, but M.C. says he’ll be a criminal from a different era. I’ll be walking around saying things like “I’m gonna’ have to confiscate that yummy drink you just got” and stuff like that.

Here’s my costume – and YES – I am bringing my full-length coat so I don’t freeze. 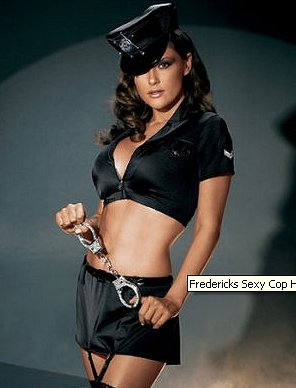 And here is the picture from last year, with FWC and I dressed as Pirates.  This will be Nuggie this year: 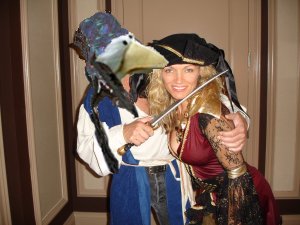 Stay tuned next week when I tell-all. Oh – and I’ll fill you in on the red carpet event I took my peeps to earlier this week!

Have a safe, fun, scary, ghostly time this weekend you gorgeous men and women!

Please tell me: What is this fascination with girls being stupid, getting drunk (or not) and showing their tah-tahs, booties and other body parts on camera?  WHAT’S THE BIG DEAL GUYS (or girls)?

I tell ya’, I speak from experience when I say that getting a girl to be slightly voyeuristic is no major Coup d’etat!  Especially if she’s just a tiny bit adventurous!   So, what is it that makes people – or should I say Americans – frenzied over this supposedly “major” feat when a gal bares all?

Whatever happened to the allure of the mysterious woman?  The sexiness of anticipation? Isn’t it true that once a girl crosses that threshold – the “I’m willing to flash the camera” threshold –  there is nothing left to the imagination?  Not only that, once she does it, is there anything left for the girl in question to explore, once her life and body is displayed across the eternity of the Internet?!

I think (and I stress the “I,” because this IS my blog after all, and what I think matters – HA!) that maintaining one’s dignity, razor sharp intelligence, edgy sense of humor and natural beauty while still managing to dance on the side of “naughty” once in a while – THAT’S the essence of TRUE WILD and SEXINESS.  You know what I mean?  Oh sure, there are some guys out there that LOVE to see  non-stripper, girl-next-door types take it all off with reckless abandon, and craziness. And, I even admit that acting out with reckless abandon now and then is extremely liberating.  HA!  I love it!  But, while I think it is fun and exciting at times, I know that maintaining control and a little mystery keeps men (or women?) that we really want to attract guessing or somewhat intrigued, and wanting more. What do you think?

Listen people:  My girlfriends are proof positive that there are plenty of ways to go wild without flapping or bouncing their boobies in front of a camera lens!  It takes some creativity.  Hell, it takes some intelligence, but we are all pretty bright here, right?  I know you must be, since you are here, reading this.  heh heh.

I remember it well:  The time my girlfriend Sheila and I found ourselves smack dab in the middle of a bachelor party.  We’d just walked into the hottest night spot (at the time) in LA, and as we rounded the bend to the bar, were confronted by a group of young, hot guys.  I won’t go into any details here because my girlfriend may get upset for sharing too much, but lets just say that ONE of us ended up going back to the hotel room booked by the bachelor party and making out with a very young little boy – of, say, about 21 years old.  We were 37.  It was so much fun, and really great to be seen as hot by those guys, I have to admit!  How much fun is that?

Hey.  I liked the attention. I know she did too.  So sue us.  We got a little wild, we had fun, and we have great stories to tell as a result!

We were actually kinda bummed out for those young boys who were celebrating their friend’s upcoming marriage at such a young age.  ‘Go to college!’ I found myself thinking, ‘Get a real job and a real life before you get married!’  Ah well, I am a mom too.  I just can’t help myself.  They were just soooo young, ya know?

Then there was the time I was in New York visiting one of my best friends, who I can’t name here, because she could lose her job.  Let’s just say that she works for one of the most fair and balanced news outlets in the country.  HA!  Anyhow, it had been a rough week for my girlfriend, so we went out one night, and met up with a few of my other girl friends.  We started out drinking martinis at Koi on the upper west side.  By the time our last girlfriend met us there, we’d closed the place down, been asked to move tables a few times to accommodate the next wave of clients, and were painting each other with temporary body tattoos.  Yep.  You read that right.  Body Tattoos. How cool is that?  Sexy too, I might add.

Then there was that one night featuring moi and my friend Kat.  My girlfriend Kat loves to cook.  She’s incredible too.  She and I got together one night to cook at my place.  We’d had vodka martinis all night, smoked cigarettes even, and then decided to start posing together for the camera.  I don’t even smoke, just to give you an idea of the inhibitions that were thrown out the window that night.  The result? Some pretty messed up girls making fools of themselves without ever taking their clothes off in front of the camera (or did we?? HA!  Just had to make you guess!) or getting behind any wheel of any car.  Imagine that.

Some of the memories I have from a few wild days and nights are shown below in my gallery.  You can click on any image to see it larger.  Let me know what you think!  I even stepped outside the box, when it comes to “WILD.”

The fact of the matter is that I am so sick of females being stupid, and rising to the lowest standard.  Do you think it’s because they want to be accepted?  Or do they want to be perceived as being hip and cool?  I’m confused.  I know some pretty incredibly cool people.  I know celebrities and very wealthy people and, even though Paris and Britany make fools of themselves, these people I know are SMARTER than that, and their happiness, success and allure is a testament to that.

Somehow someone started thinking it was cool to be uninhibited at ALL times.  I’m all for being uninhibited.  My friends will tell you I am one of the more daring girls they know.  It’s all about context, and knowing when it is not okay.  So many people out there make US – WE WOMEN – seem less valuable and less cherish-able or less worthy of adoration by giving every single part of themselves away.  YOU – my lovely, incredible, bright shining light of a person – are the only one who can insure that people see just how radiant you truly are.

So here’s to BEING WILD at times.  Here’s to being CRAZY and FUN and SEXY.  Go for it!  Just remember that you are BEAUTIFUL on the inside, and ought to display that for all to see.  Here’s to you!  Go WILD, why don’tcha!

[digg=http://digg.com/arts_culture/Girlfriends_Gone_Wild]
Register to receive these posts by email by Clicking Here