Avast there mateys!  Be afraid! Be very afraid!  Sit closer together with yer’ loved ones, to protect yerselves.  This post is sure to deliver a mass of sorted tales of mayhem, with plundering pirates lurking in every corner.

Ye come, seeking adventure with a vast array of plundering (and sexy) pirates, eh?  Sure, you’ve come to the proper place.  But keep a weather eye open, mates, and hold on tight with both hands, if you please.  Thar be squalls ahead, and Davey Jones waiting for them that don’t obey!

To learn what the most daring (and sexy) of pirates do to amuse themselves on All Hallows Eve (Halloween for ye lowly scalliwags), read on.  But beware, and sit tight.  If ye are new to this blog, again I warn ye – Beware!

The daringest (and sexiest) of pirates make the pilgrimage to the city of Gold – that is Las Vegas, of course.  They do it to wreak havoc and cause turmoil, plundering and pillaging wherever their wooden (or sexy) legs will carry them.

My weekend with my pirate mates, Captain Fred the Wonder Chicken and the fair pirate wench Britt, was suppose to commence on Friday morn, half past ten.  (Okay – enough with the pirate talk.  Back to reality now!  ha ha!)

We planned to hop in the car, barring any other issues, and drive to Vegas together, laughing all the way, as we plotted and schemed for our takeover of that glittery fortress.

On Thursday, however, Britt had the remarkably brilliant idea of leaving THAT evening and playing until dawn.  FWC and I, being the spontaneous and boisterous sort of pirates that we are, agreed it was a brilliant plan.  Even pirates need to have fun before they get to work.

It started at the the Golden Nugget, where we sexy (don’t forget), yet disturbingly SCARY pirates ransacked, pillaged and looted all the way to our room.  I tell ya, the Golden Nugget didn’t know what hit them! Our final resting place for the rest of the weekend, The Bellagio Hotel, hadn’t seen pillaging like that since the LAST time Fred the Wonder Chicken was in Vegas, and THAT day has gone down in the annals of Sin City HISTORY, I’m sure.

We had an incredible suite with a view that was BREATHTAKING.  I’m sure it was all an attempt by the hotel to get us to behave, but THAT didn’t work!

On Halloween night, we donned our best dress pirate wears, and I sat down for some photos.  I didn’t want to do it, but I was the Pirate Queen, and a queen’s job is never done.

Suddenly, Captain Fred the Wonder Chicken grabbed me (he’s so manly for a chicken) and put a sword to my throat.  It was really sketchy there for a minute.  But then I reminded him that we still had a full night of plundering and seeking out wenches to come and play.  That was all it took.

Though pillaging and plundering was on our minds, our first order of business for the night was to get some GRUB.  And that we did.  We had the most fabulous meal to be had in the Bellagio resort, at their restaurant Yellowtail.  Even Captain FWC ate things he never thought he would.  We seamen and women grow weary of eating fish, and some of us surely don’t want to eat it raw.  But that’s what Yellowtail was all about.  Sushi. YUMMY. It was all good.

So, here’s a question for you.  Where do sexy pirates, once well fed and full of good wine, go to plunder and pillage?  Why to The Bank, of course.  That is the Bellagio’s hot night club.  One of the hottest spots in town.

We took our swords and daggers and stormed the entrance to The Bank, and look at what we found inside: 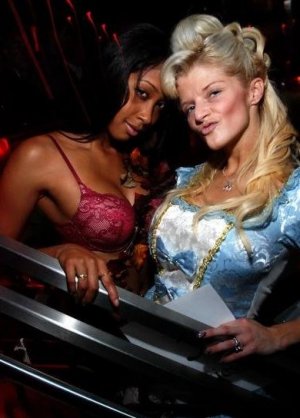 The VIP floor was FULL of beautiful, (some scantily clad) people. They corralled them there for the costume contest to be judged later that night.  These girls were trying for the big 10,000 dollar prize (Yep.  These very girls were there!). I think they should have won.  Never wanting to be left out, I scurried down to the VIP floor to dance with them!  The guards to the VIP area wouldn’t let Captain FWC down to enjoy their company as well.  Only women were allowed in, and of course as the Pirate Queen, I was graciously admitted.  Alas, though I enjoyed dancing with these beauties, I had to be mindful of my queenly duties, and save all manner of debauchery for later.

Though I’ve managed to tell another tale of mischief as if it happens every day, I cannot fool you any longer. I’d like to say it’s just another day in the life, but I promise, I am just another “girl next door.”  Only better.

Have a wonderful weekend my sweet things!

—————————–
Register to receive these posts via email by Clicking Here