The other night I had just finished teaching two very intense SP Pilates classes at Sweat Pilates in Culver City, when I decided to stop by the Trader Joe’s. The last thing I wanted to do was shop for groceries at 9:00 PM at night, but I sucked it up and drove over.

I think grocery stores and markets around the country should make it a policy for their staff to stand at the front door and hand out merit badges (read: at least 30% off purchases that night) to anyone who buys more than four items at 9PM on a Monday night. Especially in Culver City (sketch-ville in spots). I should get the discount just for the effort. It’s never easy to drag my ass over to any store at that time, let alone one in Culver City to do the full blown SHOP thing.

I was pretty high on teaching adrenaline after my classes, so when I got to the entrance and a guy who looked like an older, African American version of Ron Woodruf from Dallas Buyers Club (with a little Morgan Freeman mix) asked me if I could buy him some food, I decided to engage with him. It’s not like I often ignore homeless people… no. I feel their pain… and realize that “but for the grace of God, there go I.” But I do admit to saying “Sorry, I can’t right now,” more often than not lately.

I stopped and said, “I can give you the cash I have on me, if that works? Two bucks?”

And the guy said, “Oh thank you so much miss. Do you mind if I hug you?”

Do you mind if I hug you?

In that millisecond, I thought about it. Yep. He looked like he had Aids – he was skinny and haggard as a rail, and had one of those 60’s style afros that reached about 6 inches from his head, was laced with silver/gray hair and was just as straggly as the rest of him.

But then I thought This may be the only time this day, week, month… YEAR this guy ever gets shown any remote affection or anything.

So I said yes.

The guy hugged me warmly.

Then he reached his head around my neck and sort of kissed the back of my neck – but it felt very wet.

He had either LICKED or tried to FRENCH KISS my neck.

EWWWWW!!! (that’s what the little girl in my post image is saying)…

I quickly said, “Have a great night…” and walked off. I half-floated away as if lived in a cartoon and had just been hit really hard on the head by one of those cartoon sledge hammers.

I still had tweetie birds circling my head when the little voices began to rattle my brain.

Did he just lick me?

What were you thinking?

What if the guy has some disease you can get through the skin?

What if he has Aids?

No you can’t, dumbass.

That was really f-ing stupid Lisa!

These tweetie bird thoughts circled my brain as I shopped, and when I hit the register, I grabbed the hand sanitizer and lathered it all over my friggin neck, hands and more.

Then I felt really stupid.

Why was I so freaked out? Because the guy LICKED me. He took LIBERTIES with me! (My Dallas grandmother would faint and probably did roll over in her grave – God rest her soul). But it was just odd. Right?

Poor guy. He probably hadn’t had any human contact like that from someone non-homeless in a long time… or hell… maybe he gets a lick every day and it’s the ONE thing he loves to brag about to his other street friends “Hey guys! I got number 357 tonight! You should’ve seen the look on her face! And I got two bucks too! Woohoo!!”

But ya know… If the guy is homeless and begging for food, and that is what makes his day just a little brighter, then GOOD FOR HIM, and I’m glad I did it.

I looked for the guy as I exited and there was no sign of him.

He licked and ran!!!

Now go out there and reach out to someone in need with your human-ness this week, would you? 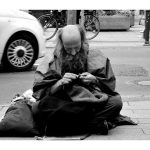