THE MAYOR OF VENICE BEACH

Yes, he is a clown, but that’s another story.

This particular effigy dangles from the corner of the CVS Pharmacy building at Main Street and Rose Avenue in Venice. 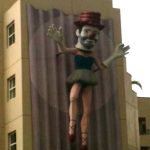 It’s our history, don’t knock it.

2 Responses to "The Mayor of Venice Beach"