The ceiling at Groman’s Chinese Theatre in Hollywood, or as some know it Mann’s Chinese Theatre (I can’t keep up with what it’s called now, because the corporate sponsors change too frequently), is historic and something to be viewed, and remembered.

There is no glass ceiling here ladies. 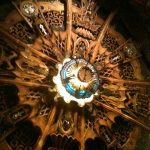