Bike accessories have come a long way from playing cards and clothes pins in the spokes. Because THIS is a thing. 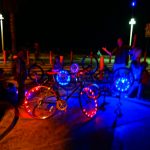