Writing yesterday about my memories of Graden as a toddler has opened the flood gates.

When my ex and I called it quits after almost twelve years and he moved from California to New Mexico, Graden was just about five. Graden and I packed up our stuffed animals, action figures and cooking utensils and moved shortly thereafter to Los Angeles.

So, what happens when you put a newly divorced single mother in the city of dreams with her little pre-schooler? Well, said child is exposed to said divorcee’s new set of friends and all that implies.

If you’re thinking I ever subjected my child to inappropriate behavior, think again. Wait. Don’t think. And if I’m too late, and you are thinking that, don’t speak. Because I would no sooner subject my child to inappropriate behavior, than I would reach through the computer screen and put a choke hold on you before you could get the words out. Just sayin’. Don’t think it, and don’t say it. I am the mamma bear. No one subjects my kids to anything I don’t want them to. Period.

What does happen, is the child tends to pick up various pieces of “language” he or she might not otherwise have heard. Language in my very strong opinion is neither appropriate nor inappropriate, in and of itself. The “words” are defined by their use, people. So if I tell a moron on the road that his fucking BMW is going to have a brand new dent if he doesn’t stop fondling his cell phone while driving…well, I believe that makes a great case for a good use of the word “fucking.”

One of the methods I employed to keeping Graden in line was to talk about age-appropriateness. If he wanted a toy, he was required to be in the age-range of said toy. If he wanted to see a movie, it was based on the film’s rating. When he became of age to see PG and PG-13 films, we had an agreement. He could see any of them, as long as I never heard of or witnessed him modeling what he saw or heard on the screen.

Then one day, five-year old Graden and I were at a cross-walk near the 3rd Street Promenade in Santa Monica. We’d just parked the car and hit the button to cross.  After a few minutes Graden said, looking out toward the promenade,”I wish this thing would hurry up, dammit.”

“What?” I said, looking down at him in shock.

He repeated himself, verbatim.

Another thing I’d decided would be different since the divorce, was I was going to remain calm if possible, when things upset me.  I would think before I responded.

After a few seconds I crouched down almost sitting on the ground and replied, “Honey, you are not old enough to say that word, okay?”

I thought for a second. “When you have gray hairs like grandpa.” I decided.

That worked for a while. 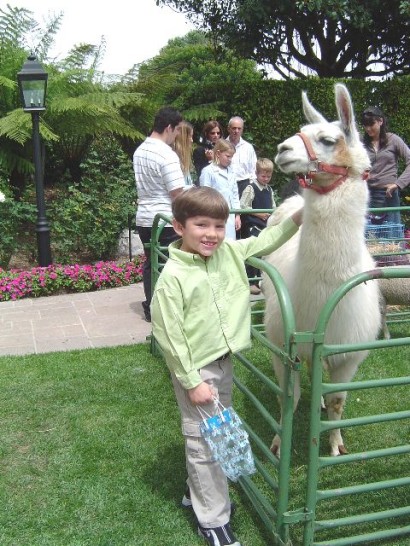 This is Graden with a llama, because, hey… here’s a llama.