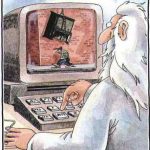 6 Responses to "When God goes hi-tech"