THIS MAY DEFEAT THE PURPOSE

Did I ever mention to you that M.C. Nugget and I dream of one day owning a bar in Bali?

I should probably clarify that. I proposed the idea to Nuggie, probably while wearing a bikini at the beach some afternoon while sipping cocktails. He stared at me like a deer in the headlights, nodded and smiled, muttering something like “Yeah…Good idea…” He really can’t help it. He’s a man, which means he’s completely and totally driven by his visual senses. But in terms of whether owning a bar would be his dream, well, I took his response as a yes.

Bali represents one of the last reasonably priced vestiges of Beach Paradise to me. I’ve never been, but the rumors must be true and I’m counting on it. If I do ever open a bar, I envision a dirt floor, grass roof, and I’d want to serve the best grilled fish tacos around. Just the thought makes me swoon. Imagine relaxing into your senior years with all the umbrella drinks and fruit smoothies you can get your hands on. I always think of the bar where Michael Douglas and Danny Devito met to talk business in Romancing the Stone or The Jewel of the Nile or something. That makes me swoon too.

I gave up on swooning over career, other sexy single men (since I have Nuggie to swoon over) or anything else a long time ago. I’m thinking ahead to retirement folks, and it is looking PRETTY freaking awesome. 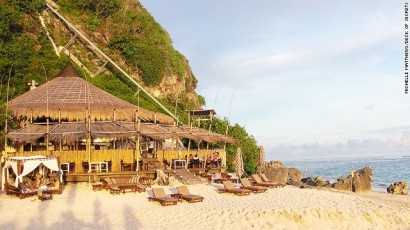 So, the other day Nuggie were discussing Bali. Because we are an exercise obsessed people (not just him and me), we mused about how to incorporate that obsession into our bar.

While we were joking about it,  this — THIS rolled off his tongue:

The words Bar and Workout, used together conjures up visions of trendy little studios that are all over the US, like Cardio Barre.

But do we spell ours Barre and confuse people? No. I think Workout Bar is best. Do you think people will know that our place offers the promise of cocktails after a great workout?

Then again, that may defeat the purpose.

8 Responses to "This may defeat the purpose"