Yesterday I mentioned how I often call M.C. Nugget “the boss of me,” and it’s quite true. It is his official title.

And with every boss title, comes the title for their subordinates.

In rapper lingo, that’d be BITCHES.

I’m not Nuggie’s bitch, although I’m not opposed to offering bitch services when it’s absolutely necessary. I’m a team player, for goddsakes. Plus, as Ashton Kutcher so aptly put it, “No job is too low.”

We were discussing this over cocktails at happy hour, and yes, it was the very same happy hour where we came up with the brilliant idea of what happens when God goes high-tech. It wasn’t pretty. But we are whacky with a chance of insanity. ALWAYS.

On this night, the conversation went something like this:

If I’m the boss, then I guess that makes you my assistant.

Sure, I’ll be your assistant.

I swatted a mosquito away, and cringed from a big black fly trying to buzz up my nose, with my arms flailing.

You can’t be my assistant if you’re constantly shooing bugs away!  We’ll have to get you an assistant.

I thought he redeemed himself, understanding my value enough to “grant” me my own assistant.

But your assistant will only handle bugs. She’ll be a bug handler.

Yes!  I NEED a bug assistant!

Your bug assistant will kill all the bugs before they get to you, so you can tend to my needs.

Well… (thinking about this)…wouldn’t we have to give the assistant a tiny bug gun, then? I mean, if she’s going to kill the bugs, and we don’t want bug spray, or pesticides… I’m thinking a tiny bug gun would LOOK cool too. Then we could have her dress like a spy or something and call her The Exterminator.  Then when you and I are trying to – ahem – work, if the bugs start to BUG me, we’ll say “Bring in the Exterminator.” 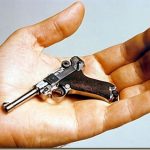 Bug assistant with a tiny bug gun. It’s on the list.