When a man like M.C. Nugget gives a gal the key to his apartment (not to mention, allows her to move in a year later), it is a momentous occasion worth submission to Ripley’s Believe it or Not.

I admit (and so would he), Nuggie had never met anyone like me before. He was caught unaware… more like shocked into sharing. His little black book didn’t know what hit it.

So imagine my surprise the other day when while out for a snack he said “Wait… look at me. Smile?”

I said, “What? Do I have something green in my tooth?”

“No… (reaching over the table) a piece of pepper.”

AND THEN HE SCRAPED THE PEPPER FROM MY TOOTH.

I was a little shocked and secretly flattered, but I couldn’t resist asking with a chuckle “So, are you grooming me now?  Are you gonna’ eat it too?”

“Yes,” he joked. “Me and the chimps baby! We’re not that different!

The difference is that I have dipping sauce!“

I laughed, “What do you mean? Like hot sauce?” 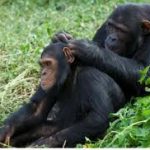 Yes, I live with this ball of non-stop humor AND I have a key. Get in line people.