It’s turned out to be an Asian fusion kinda night for me on two fronts: I made stir fry (yummy stir fry, I might add), and then when M.C. Nugget was walking a friend of ours out to his car after feasting on my glorious delicacy, he called me outside to see something. I walked out and the sky was black as night. Sprinkled upward from somewhere on the beach beyond, were asian ceremonial lanterns (sky lanterns) lit with candles being launched. Every few seconds another one went up. It was incredibly peaceful after my long, packed-schedule day. 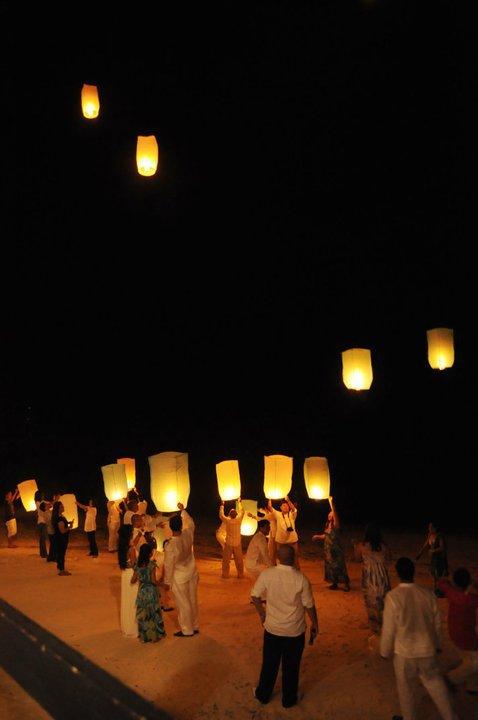 When I say packed, I mean wake up at four o’clock in the f-ing morning packed, from that very moment, packed.

I woke up, started working and left the house for various commitments at 10 AM. I didn’t get back home until about 8 PM.

As I drove home from teaching a 5PM and 6PM Pilates class (after my full day, I might add), I was craving stir fry.

It’s not the craving that is so bad. It’s the getting the kind of stir fry I like that presents a challenge.  If I’m really craving “it” – the it I love – then I must make it.  The only restaurants I know that make stir fry the way I like it, are Teppanyaki restaurants (like Benihana). Stir fry must be fresh and crisp. There shall be no soggy vegetables in my stir fry, PERIOD.

It was after an incredibly long day involving one short film festival (where a film Nuggie was in, screened — he was INCREDIBLE, thank you very much) at Grauman’s Chinese Theatre in Hollywood, and an ungodly amount of traffic. The CARS, people!  Oh, and the PEOPLE… the oodles and eons, and overflowing and shooting out in front of me like a shaken up bottle of diet coke, PEOPLE.

Today the friggin’ IDIOT drivers that were let out of their insane asylums for some reason, seemed to unleash an inordinate amount of hostility from deep within the recesses of my soul.  I was throwing F-Bombs around like a millionaire throwing twenty dollar bills in a strip bar. I was making it rain f-bombs.

I stopped at the store for all of the ingredients to make the most fabulous stir fry known to man, and arrived at home to Nuggie and a friend watching football.  THAT – believe it or not – was the best part of my day.  Cocktails, football, Nuggie, me and a kitchen where I could make my stir fry – the way I like it… The sky lanterns (in celebration of someone’s nuptials) were just the icing on the cake.

Not a bad way to put an end to a hectic day, eh?