I WAS ROCKING *AND* ROLLING

So the other night, M.C. Nugget and I went out for some cocktails with my new BFFs Marrie and Suzie. I mentioned here how Marrie and Suzie (fellow bloggers who also dish on dating and relationships) and I have known each other for about six years or something, and yet we just met in person this week. That was a very cool experience.

But on Friday night we brought the SMACK DOWN on nightlife in Santa Monica when the four of us decided to meet for drinks after happy hour, after we’d already had a couple of cocktails.

Sure, it began as a respectable gathering. We grabbed a great table on the outside patio at Areal (our favorite place), and shared funny stories. It felt very civilized. I think… I mean, isn’t THIS what respectable, fun and interesting adults do? I’m just curious.

After a few cocktails and a couple of other stops, we (me) decided it was time to dance. I like to dance, and if I hear good music, I’m done for. Play a song I’m in love with at the moment, and I AM CUTTING A RUG, you guys. It’s a weakness I was born with (it runs in my family, as evidenced by the above photo). If the Pied Piper tried to woo me, that blasted flute thing wouldn’t do. Not unless he played a beat-box track along with it. Then, I’d be toast. And this is true, whether there is alcohol involved or not. Alcohol merely intensives things.

As the evening at Bar Copa (the closest dance place we could get to) progressed, I decided to busta-move in front of our little table. When I say busta-move, I don’t mean twerking, no. We’re talking deep knee bends… the kind where you squat all the way down to the floor and stand right back up. I can do this… normally.

I was able to do it a couple of times, but I was a little wobbly, so instead of cutting my losses and moving on, I chose to keep trying. I teetered forward a couple of times, catching myself on the little table in front of me, until I finally over compensated, and rolled backward onto my BUTT.

Great way to break out my slick cool moves for my new girlfriends, I know.

Nuggie quickly jumped up, “Okay, dancy, come and sit over here with me.” But there was no controlling me. I just kept rocking AND rolling.

It wasn’t the alcohol, I swear.

It was THESE SHOES. 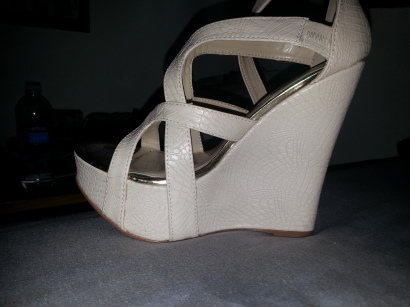 I promise, if you try to deep-knee-bend-dance in these shoes, you WILL invent a new dance. It will be called the ROLLY POLLY.

It brings a whole new meaning to the song “Get on up on the dance floor.”

#MomFactor: Every mom needs a little fun now and then. That’s all I got.

Register to receive these posts once a week by email and get the blissful yoga routine in an eBook “Ahhhhh…Haaaaaa Moments with Ms. Cheevious” by Lisa Jey Davis for FREE as a result. Registration is on the right sidebar of every blog post, or on our Facebook page. See you next time.

16 Responses to "I was rocking *AND* rolling"