I WALKED INTO A BAR

I didn’t take a photo last night while at dinner, even though I knew I planned to tell you a story about it. So, this photo is of some random place I’ve never been. I simply wasn’t thinking of you guys or a photo at dinner. I blame the wine.

But you know… sometimes I think Enough already, Lisa. You do NOT have to snap a photo every godforsaken place you go. So, instead you get one that looks like I should have been THERE. My neighborhood bistro / bar La Vecchia is pretty cool with the right photography, too, but I definitely want to go to the place in THIS photo. 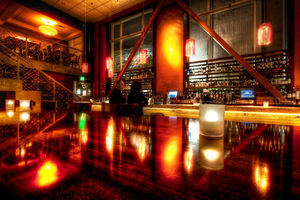 Vecchia has a rockin happy hour, so the bar is always packed (which is where you must sit to get the happy hour deals). You guys, they have about three SALAD options on their happy hour menu for about 6 bucks (plus their cab-sav is pretty great). I am obsessed with Vecchia as a result and almost always want to go there. It’s when they bring the hot baked bread and olive oil which really tastes best when paired with rigatoni bolognese, that things go south. You guys! Dangle that yumminess in front of me, and all thoughts of living healthy are like – “What’s your name? And… you would be?” – basically forgotten. Which is why I do not always go to Vechhia.

I got in without much of a wait since I was alone (don’t forget, Nuggie is in Tucson on a film), and I sat down next to a nice guy who was also flying solo (his gal went to Panama to settle a land dispute. WOW). Robert worked in Music Publishing. He was telling me about his industry… how Sony is the biggest in the publishing arena. He said the thing that everyone says when they aren’t working (myself included) – that the business has changed incredibly over the years. Then he laid this on me. He said:

Sony Publishing bought EMI in partnership with David Geffen and some other really rich guys.

I almost spit my wine out, I just found that so funny. I said, “Really? Some other really rich guys? I need me some of those so I can buy some things…”

We all really need at least one of those.

Better yet. Let’s BE one of those.  God knows I plan to be “a really rich guy” (you know what I mean) one day.

Can I get an AMEN!

Such a funny little experience makes me think perhaps this walking into a bar thing should become a regular thing.

6 Responses to "I walked into a bar"