Today M.C. Nugget was kind enough to offer to wash my car. This is something I always accept with glee. I often add a token grin and run over to throw my arms around him too.

But you see, this was BIG for me. Because even though I am a clean person, for some reason I don’t get around to washing my car often. I’m not sure why, because when I owned my own condo, my place was always immaculate and presentable enough even for pesky surprise guests. But when it comes to my car it’s bad. Really bad. It’s like a mental block.

The only problem was he wanted to wash my car at a time when I needed to go to a nearby pilates studio and “observe” an exercise class by one of my favorite instructors. (I planned to steal her routine and use parts of it in my classes).

Have I told you what a good guy Nuggie is?

I suggested with a coy little grin how we could possibly still make everything work, if he were to one-up his favor and drop me off near said exercise class.

I went to observe the class dressed in my workout attire, because… duh. I’m an instructor extraordinaire.

The class is taught on these machines that doll out pain from hell… much like these below:

I arrived, and my friend welcomed me with “You can drop into class if you like, because I have one machine open.”

I immediately jumped at that, because when this happens, and you’re offered a FREE CLASS, you just DO IT.

The thing I hadn’t factored in was my walk home afterward, in the HOT sunshine.

Don’t anybody panic for me. I know you were already beading up with sweat over this, but I was FINE.

EVERYBODY, I was FINE.

I got home and proceeded to eat a healthy Weight Watcher’s Smart One (a favorite of mine). I hadn’t eaten all day, and it was afternoon before I got home.

It was yummy and all, but I was HUNGRY.

Somehow, when I am tired and depleted from a rigorous workout something this always happens: Peanut Butter popped into my mind.

I know. Not the healthiest of foods when one is in a constant war against hormonal weight gain.

But PEANUT BUTTER was there, and it wasn’t leaving.

So, I caved people. I walked into my kitchen, slathered a bit on half a banana, and didn’t stop there. I took a piece of bread and slathered that crunchy peanut butter all over it and gobbled it down. 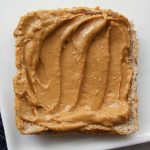 But let’s look on the bright side:  For those times when I’m TRYING to gain weight, I’ve got a very quick, easy solution: PEANUT BUTTER… and lots of it.