‘Tis the season for goodwill and all that stuff, and I my head is splitting in half while I’ve somehow managed to cough out a horse. This is some painful stuff you guys.

I don’t know whether I got sick because a) I’ve been in denial over the last three months that my allergies were getting worse,  b) I went to Tucson to be with M.C. Nugget while he was working in a film, and the Casino we stayed in was filled with smoke, c) the film schedule switched to all-night shoots on the last two nights while I was already feeling a little “less than”, or d) said last night location made me sick from a combination of below-freezing temperatures and engine exhaust seeping into Nuggie’s trailer while I worked… I’m making the brilliant assumption it’s a combination of all of the above. 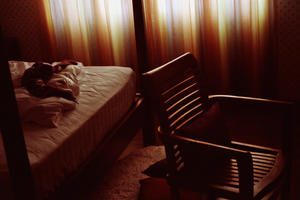 Nuggie and I arrived home with five bags full of dirty clothes, another trip coming up in a few days, and we managed to turn our fairly tidy apartment into a disaster zone.

I’ll say this: that bed isn’t going to make itself, and lord knows I’m not doing it. I’ll be over here on the couch with my Kleenex box.

Needless to say I’ll be posting random, Nyquil-induced articles. Hold on people! This will be interesting.