A WING & A PRAYER

On Saturday M.C. Nugget and I drove down to San Diego for the weekend to stay with some of our great friends Gecko & Tee. We met them at their golf club the Grand Del Mar on the drive down, so Nuggie and Tee could golf while I laid leisurely by the pool with Gecko and our other bestie Minnie (she’s a skinny minnie).

I am definitely built for the leisure life. Especially when the weather cooperates. Gecko, Minnie and I had a remarkable time lounging in the warmth of the sun, sipping Chardonnay and flipping through fashion magazines. I almost felt like I envision life must be for one of the Kardashians (minus the rappers and the cops). It was GRAND.

The next day during our marathon NFL time, Tee showed me these photos of two hawks and a crow he’d actually taken with his phone on the course. He said one hawk had a crow in his talons, and another hawk flew up to him just as he was about to eat the crow, and started to move in on his meal. 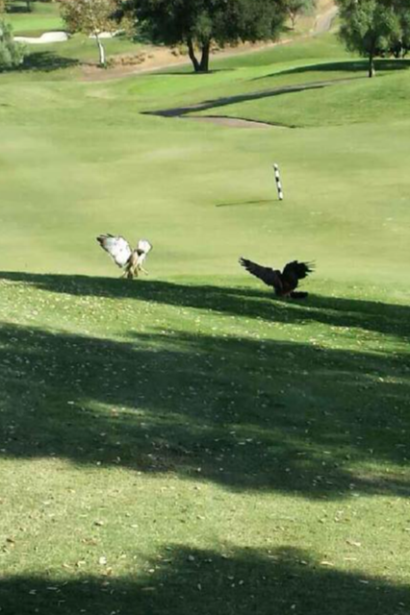 Tee said the two hawk’s got into a big fight, and in doing so…. 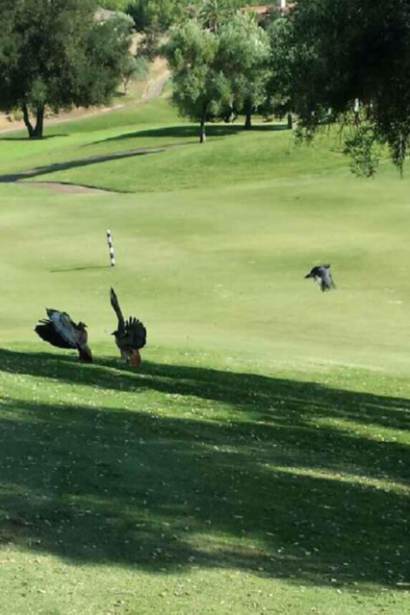 lost the crow, who flew off as fast as his wings would carry him.

I am always in awe of people who capture these things as they happen. I’m the one in a scenario who’s always out some place witnessing something unbelievable… but by the time I think to snap the photo, I am fumbling around in my purse, throwing out my cosmetics bag, sunglasses, wallet… to get to my camera. Usually when the place is closing and the janitor is mopping up to go home.

I thought about that crow, and that I needed to talk about him in the blog.

Nuggie gave me the quippy title “Wing and a prayer” and I imagined the poor, lucky sap hyperventilating out something like, “Holy shit, I got out on a wing and a prayer,” and here Tee trumped me as well. He said:

“That crow was at the bar that night saying “Yeah, I kicked a hawk’s ASS today. You should’ve seen it.”

I could have called this post “A crow walks into a bar…” with that line. It was pure perfection.

PEOPLE. I have GOT to get some Ginkgo Biloba or something so I don’t have to steal shit from my friends for the blog. Isn’t Gingko Biloba that brain food that makes your synapses fire quicker? Yep. It’s on the list.

Please visit my BREAST CANCER AWARENESS SHOP and show your support. The response has been MILK TOAST people. MILK TOAST. And I know this is not like you or any of us. So, let’s show we care!

2 Responses to "A wing and a prayer"